This article deals with the surgical options for presbyopia correction through the available methods for obtaining multifocality.

Accommodation is the change in the dioptric power of the eye that allows us to focus from far to near(1). Presbyopia is the loss of accommodation, which begins early in life and becomes clinically manifest around age 40(1), enabling people to perform near vision activities without the use of glasses.
Presbyopia correction has been a challenge for refractive surgeons due to the fact that we have not achieved full restoration of accommodation and we have to rely in pseudo-accommodative procedures, which improve near vision by the induction of multifocality or increasing the depth of field(2).
It has been estimated that by 2020, 1.37 billion people will be affected by presbyopia(3), so, its correction is necessary as it decreases the quality of life(4) and represents an economic burden(5).
Presbyopia can be surgically corrected at the cornea with procedures like LASIK monovision, micro-monovision, presbyLASIK, Laser Blended Vision and corneal inlays; at the lens with multifocal or Extended Depth of Focus intraocular lenses ( EDOF IOLs), or with phakic multifocal IOLs. The selection of the procedure will depend on the patients’ age, expectations, daily activities and ocular comorbidities.
In this article we will discuss the surgical options for presbyopia correction.

The current corneal procedures for presbyopia correction are: LASIK monovision, micro-monovision, Laser Blended Vision, presbyLASIK and corneal inlays. The main advantages of these procedures are their reversibility, they are minimally invasive, and ideal for young presbyopes (<50 years). Ancillary tests like corneal topography and ultrasound pachymetry are necessary before surgery; patients with thin corneas or corneal ectasias are not good candidates for these procedures.

Fig. 1: Corneal topography before (A) and after (B) central presbyLASIK (PresbyMAX).

Due to the fact the peripheral presbyLASIK ablates a significant amount of corneal tissue in order to create a hyperprolate shape, central presbyLASIK is the most widely performed technique(11).
Some of the central presbyLASIK software available are: PresbyMAX (SCHWIND eye-tech-solutions GmbH, Kleinostheim, Germany), SUPRACOR (Technolas Perfect Vision GmbH, Munich, Germany), and AMO Visx hyperopia-presbyopia multifocal approach (AMO Development LLC, Milpitas, California).
The PresbyMAX software was developed by J. Alió and S. Arba; it can be used in emmetropic, myopic and hyperopic patients having good near and distance outcomes(12-16).
Although both techniques improve near vision, a loss of lines in distance vision has also been reported(17).

Laser Blended Vision combines a low degree of asphericity and micro-monovision in the near eye to achieve a good near and distance vision. This technique has good visual near and distance visual outcomes and can be performed in hyperopes, myopes and emmetropes(18-20).
We refer to the combination of monovision and corneal multifocality as “hybrid techniques”, LBV, Supracor and PresbyMAX software are within this group of hybrid techniques and they have improved the outcomes of corneal multifocality.(21)

Intracorneal inlays have the advantage of being minimally invasive, reversible, and their implantation is easy, even though, its use has been questioned due to the decrease in contrast sensitivity, distance visual acuity and risk of corneal haze. All corneal inlays have to be centered on the first Purkinje reflex(22), and implanted under a stromal flap or within a stromal pocket made by the femtosecond laser(23) in the non-dominant eye(24) (Fig. 2).

Three different types of intracorneal inlays have been developed: corneal reshaping inlays, refractive inlays and small aperture inlays. We will discuss the latter because they are the most widely implanted inlays(22); corneal reshaping inlays (like the Raindrop, Revision Optics, Lake Forest, California, USA) have been phased out the marked due to an increased risk in corneal haze and loss of distance visual acuity, and refractive inlays (Flexivue (Presbia, Los Angeles, California, USA, Icolens, Neoptics AG, Hunenberg, Switzerland) have had contradictory results that have limited their clinical use. 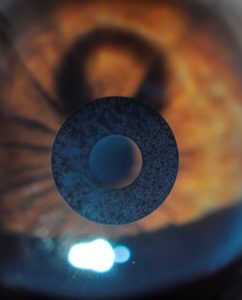 The Kamra inlay (Acufocus, Irvine, California, USA) improves near vision by increasing the depth of focus, it is an opaque inlay that has 3.8 mm diameter, a 1.6 mm central aperture and 8400 microperforations which allow an adequate nutritional flow through the cornea(25) (Fig. 3).

It can be implanted simultaneously with LASIK for myopes, hyperopes and emmetropes, with an improvement in near and intermediate visual acuity.(26,27) Some of the complications after the implantation of the Kamra inlay are: haze, photophobia, blurred vision, halos and refractive shifts(28-30); these complications have limited its use.

Replacing the crystalline lens by a premium IOL is the most definitive option for presbyopia correction as they correct distance, intermediate and near vision. They are the best option for hyperopes older than 50 years, and myopes older than 55 years.
Multifocal IOLs were introduced in the 1980s(31), and since then, their design has been improving in order to induce less photic phenomena while maintaining good visual acuities.

Considerations prior to Multifocal IOL implantation

A careful patient selection is mandatory in order to achieve good results.
Patients with type A personalities, as well as extremely demanding patients are not good candidates for a multifocal IOL. Patients with ophthalmologic conditions that decrease contrast sensitivity like advanced glaucoma or macular diseases are not good candidates for a multifocal IOL, as well as patients that lack the summation benefit of binocular multifocality (monofixators)(32), patients with irregular astigmatism, corneal and pupillary abnormalities(33). Astigmatism should always be corrected, so a topography is needed prior to surgery in order to choose a toric multifocal IOL.

Rotationally asymmetric IOLs are the newer versions of refractive IOLs, they have an inferior segmental near addition and an aspheric distance-vision zone with a smooth transition between the two zones. They provide a good near, distance and intermediate vision with minimal photic phenomena due to the fact that light hitting the transition zone is reflected away from the optical axis preventing diffraction.(35) These IOLs include the Lentis Mplus (Oculentis GmbH, Berlin, Germany), and SBL-3 IOL (Lenstec. Inc., Christ Church, Barbados)

Extended depth of focus IOLs instead of creating several foci like multifocal IOLs, they create a single elongated focal point in order to enhance depth of focus; reducing photic phenomena.(36) Although intermediate vision is excellent with EDOF IOLs, near vision has a decreased quality(37,38) due to the induction of aberrations.(36) Pure EDOF IOLs are based on the pinhole effect like the IC-8 IOL (AcuFocus Inc, CA, USA), or on the spherical aberration like the Mini Well Ready IOL (SIFI, Catania, Italy).(36) Hybrid multifocal EDOF IOLs use chromatic aberration, a diffractive/refractive EDOF optic, or an additional power to increase the near vision.(36) The Tecnis Symfony ZXR00 (Johnson and Johnson Vision, Jacksonville, FL) and the At Lara 29 MP (Carl Zeiss Meditec, Jena, Germany) are an example of a diffractive/EDOF IOLs, the Lucidis (Swiss Advanced Vision, SAV-IOL SA, Neucha?tel, Switzerland) is a refractive/EDOF IOL, and the InFo – Instant Focus IOL (Swiss Advanced Vision, SAV-IOL SA, Neucha?tel, Switzerland) is a refractive-diffractive EDOF IOL. 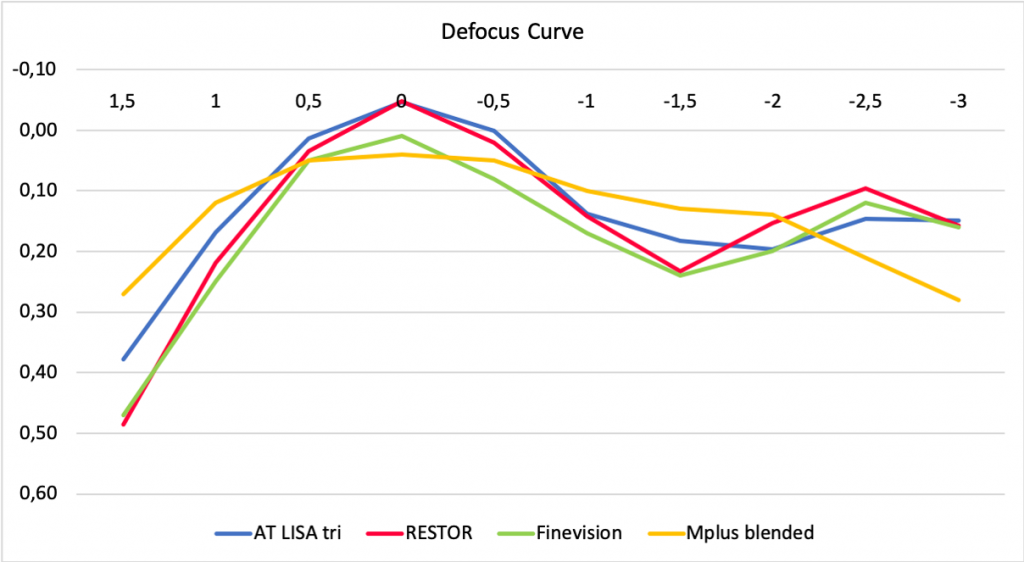 Higher order aberrations play an essential role in retinal image quality, and these can be induced by IOLs and affected by pupil size (Fig. 5 – 6). Compared to monofocal IOLs, multifocal IOLs typically result in more intraocular aberrations(46), although contrast sensitivity outcomes are comparable for monofocal and multifocal IOLs(47). 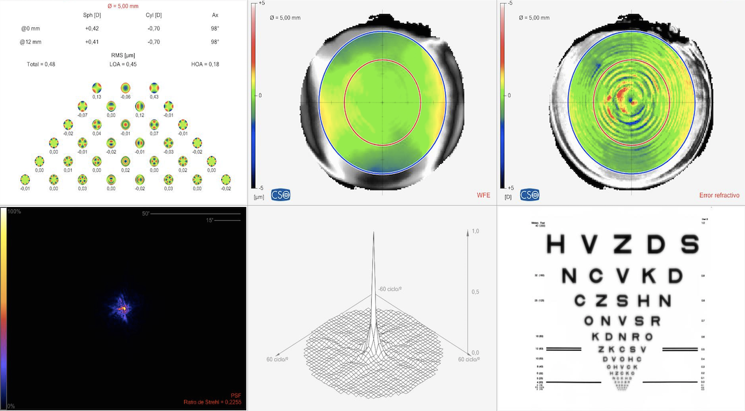 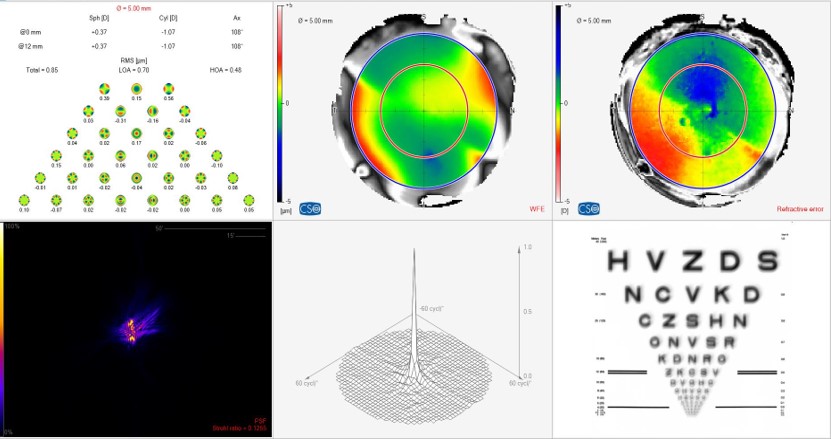 Blurred vision is the leading cause of dissatisfaction which can be secondary to a large pupil, residual ametropia and astigmatism, posterior capsule opacification and dry eye(33). The second cause of dissatisfaction is the presence of photic phenomena like halos and glare, which appear more frequently after the implantation of a refractive IOL(33).
The most common reasons for multifocal IOL explantation and lens exchange are decreased contrast sensitivity, photic phenomena, neuroadaptation failure, incorrect IOL power, excessive preoperative expectations, IOL decentration and anisometropia(33).

The development of increasingly advanced technology for measuring and understanding aberrations, and its effect on visual quality have brought great advances in the development of intraocular lens implants. Hybrid multifocal EDOF IOLs are a promising technique that will promote the neuroadaptation process post-implantation. Focus now turns on allowing an individual to regain accommodation, whether by refilling the capsular bag with polymers that mimic the crystalline lens(48), and most especially to the creation of increasingly improving accommodative intraocular lens implants(49).

For now, most of the available methods for obtaining multifocality are adequate and effective. Treatment is individualized to meet the patient’s needs and maximize vision at all distances. Careful patient selection and screening, and thorough explantation of risks and benefits associated with each treatment option cannot be emphasized enough during the pre-operative planning period.